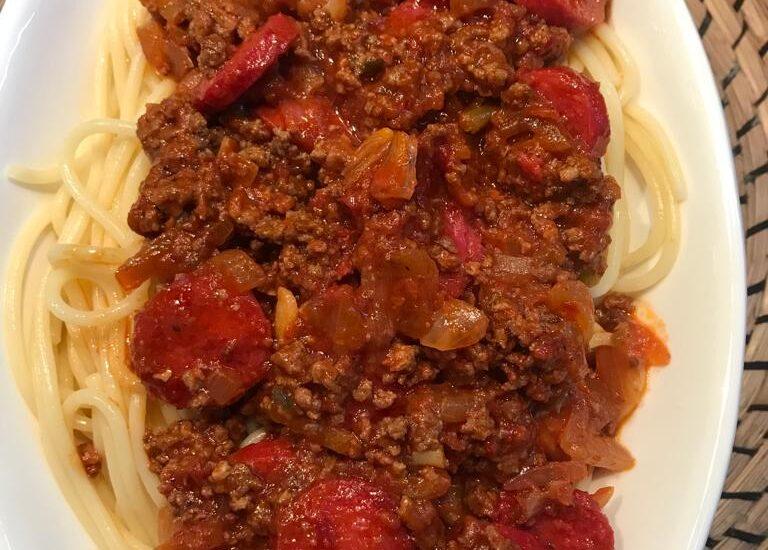 This Filipino spaghetti recipe is the star of birthday parties or other celebrations in the Philippines. Guests always want this spaghetti on the table. This noodle recipe contains sausage, ground pork or ground beef, which Filipino children love. Some versions include corned beef, finely grated carrots and any spices you want.It is believed that this dish was invented by Filipino mothers who realized that their children love sweets. Today, this cheap meal is known as the meal that unites families and is eaten by both the poor and the rich.

Filipino spaghetti is a sweeter version of traditional Italian spaghetti. Filipinos also serve their spaghetti with lots of grated cheddar cheese. There are also versions where grated cheddar cheese is added directly to the sauce and cooked. This type of cheese is very popular among Filipinos. Other cheeses, such as Parmesan, are commonly used for Italian spaghetti This recipe is usually served with a slice of roasted garlic or plain bread. It can be eaten as a snack or merienda.

What is the difference between Filipino spaghetti?

History Of The Sweet Spaghetti

There is no record of who, when or how the Filipino spaghetti was invented. There are no records or historical explanations of how or where they came to the country. During World War II, there was a shortage of tomatoes in the Philippines. Since the red tomatoes used for spaghetti were not grown in the Philippines, they had to be imported from the United States.

Maria Orosa found a way to make a ketchup-like substitute from bananas, and banana ketchup was born. One day MacArthur was craving Neapolitan spaghetti, and a Filipino colleague made it with banana ketchup. Sausage cubes were also used instead of meat, and the sweet Filipino spaghetti was born.

Why Do Filipino People Love Spaghetti?

I don’t think there is anyone who doesn’t like spaghetti, especially almost every child likes to eat spaghetti. On the other hand, Filipino spaghetti has a great cultural significance because it is a comfort food for Filipinos. This sweet spaghetti is served in almost every special day, especially in children’s birthday parties. Guests are always delighted when this spaghetti is on the table!

You can also try the following recipes that might interest you.

After this information, we head to the kitchen where we would love to prepare a Filipino spaghetti recipe that is different from other spaghetti.

A Filipino spaghetti recipe that is the star of birthday parties or other celebrations in the Philippines.

Like Americans, Filipinos have also modified Italian spaghetti in various ways. Filipino Spaghetti is the only Filipino dish that does not contain rice. It has some of the sweetness of Filipino spaghetti but is served with meatballs rather than hot dogs. People who live in developed countries like the U.S. have no problem eating extra calories, but in the Philippines, many people need every calorie they can get.

This situation has something to do with the economic situation of the country, because adding sugar to food is one of the cheapest ways to increase calories. It can also be said that adding cheap hot dogs is the cheapest way to get protein. The tomato buying crisis of the time gave birth to banana ketchup, and conditions were perhaps even more difficult than they are today. Although such situations seem strange in developed countries, I think it is quite normal and necessary in underdeveloped countries to be cheap in most things. This is perhaps how the Philippines changed the taste of spaghetti.

How Do Italians Feel About Filipino Spaghetti?

Italians often have a hard time with unorthodox recipes, which I think is natural because habits are so ingrained that other types of spaghetti taste really bad to them. When people talk about Asian cuisine, they usually think of Chinese, Thai, Japanese or Indian dishes. However, Filipino cuisine is characterized by a great variety of flavors, creativity and originality.

I tried to give you detailed information on how to make Filipino spaghetti, its history and how it came to be. Please don’t forget to follow me on Instagram and let me know your questions and opinions in the comments. I hope to see you again.

Why Does The Philippines Have Banana Ketchup?

During World War II, a food engineer named Maria Y. Orasa in the Philippines, who could not stand the fact that tomatoes were imported at very high prices from other countries for the production of ketchup, even though there were so many beautiful bananas in her country, invented banana ketchup as a remedy for the Philippines’ foreign dependence. This invention was so successful that ketchup production in the Philippines is still done with bananas today. In short, the story of this ketchup is both a fight for independence and the groundbreaking discovery of a smart and determined scientist.

What is the importance of banana ketchup?

Whether you want to eat healthy or out of enthusiasm for your own business, make ketchup with the winter fruit banana and not the summer fruit tomato .Banana ketchup contains vitamins B1, B2 and B6.

If you can’t find banana ketchup, you can make it yourself by following the instructions I give at home. The following materials are needed.

Now that you have prepared the materials, follow these instructions:

We have reached the end of my article about Filipino spaghetti recipe. Have you tried this spaghetti recipe with banana ketchup? Feel free to share the details with me by leaving a comment below. Hope to see you again, goodbye.

Does Jollibee spaghetti have pork?

There is pork, but if you don’t like pork like me, you can use lean ground beef or just beef sausage.

Why is spaghetti in the Philippines sweet?

Filipino spaghetti gets its unique sweetness from banana ketchup, which is exported to dozens of countries with large Filipino populations.

Although the exact date of the invention of pasta is not known, the development of pasta is clear from the sources. In 1292, the famous traveler Marco Polo saw pasta during a visit to China and described it when he returned to Italy. According to this recipe, the production of spaghetti began in Italy.

What are the differences between Philippine pasta and Italian pasta especially when it comes to their ingredients?

Filipino spaghetti noodles a little overcooked. They also have a red color and taste sweet and spicy. Chopped sausage, ground pork (not lean ground beef), onions and garlic are mixed into a thick sauce of banana ketchup and tomato paste.

Do Filipinos put sugar in spaghetti?

Filipino spaghetti has a sweet flavor that is usually flavored with a tomato sauce made from brown sugar or banana ketchup.

Thanks to the mixture of vinegar and spices it contains, it somewhat resembles tomato ketchup.