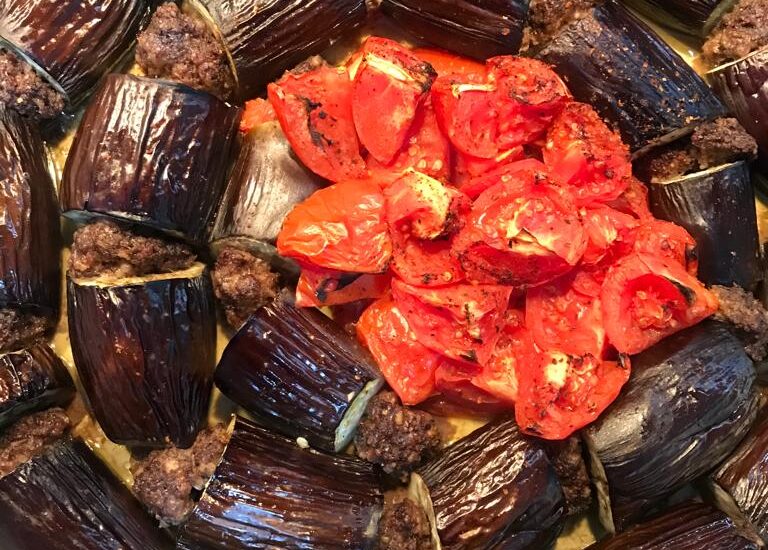 Eggplant kebab from Gaziantep region is one of the dishes that have been prepared for many years and has become a traditional dish. Eggplant kebab, which is popular for its appearance and taste, is also preferred because it is one of the easy dishes to prepare. People who are not so good at cooking, but still want to cook a good meal for their guests, can fulfill their wishes with this kebab. Eggplant kebab recipe can be a lifesaver when combined with rice and tzatziki.

The ingredients to know when using the eggplant kebab recipe can be variable. In other words, the number of tomatoes and peppers and spices can be reduced or increased as needed. If you like different spices, you can add additional spices. Although these are the main ingredients of the recipe, people who want to make changes can use other vegetables.

How To Make Eggplant Kebab?

First, minced meat and spices are mixed and kneaded well. Then 1 eggplant is cut into 4 or 5 pieces. The minced meat is cut into pieces slightly larger than walnuts and rolled, and I put one eggplant and one minced meat on the tray. Finally, the sliced tomatoes are placed in the center of the tray. It is served after cooking in a preheated oven for about 1 hour.

How Many Calories Are In Aubergine Kebab?

Can You Eat Patlıcan Kebab On A Diet?

Those who are dieting and watching their weight wonder if eggplant kebab is suitable for dieting. This kebab belongs to the group of medium calorie foods. Aubergine kebab is made by deep frying eggplant. Since it is deep fried, it absorbs a lot of oil. Aubergine kebab should not be consumed excessively because of its high fat content.

But if eggplant kebab is prepared in the oven rather than deep-fried in oil as in my recipe, it is suitable for the diet both in terms of calories and health. Eating this kebab with fried eggplant can lead to weight gain. However, if you eat a low-fat aubergine kebab from the oven once in a while, you will not gain weight. Also, you will have less calories if you choose the minced meat used low fat.

Why Do You Soak Eggplant Before Cooking?

For more information and to experience a feast of flavor, click on my recipes for other kebabs and meat dishes that may interest you.

After this superficial information about eggplant kebab, we roll up our sleeves and head to the kitchen to prepare this delicious and easy-to-prepare dish.

If you pay attention to the following details when preparing the eggplant kebab recipe, a wonderful main dish with the delicious harmony of eggplant and ground beef, you can be sure that the taste of your food will be even better.

How To Make Eggplant Less Bitter After Cooking?

However, if you want to deep fry the eggplants, they have been known to burst when water and hot oil mix, and splatters will form, so place the cut eggplants on a paper towel. Put plenty of salt on the inside. Place in a single layer and let sit for at least 20 minutes. When done, wipe off the surface liquid and remaining salt on the eggplant with a paper towel. The enzymes have been denatured and the eggplant is now ready for cooking.

How Do You Know If Eggplant Is Bitter?

Why Are My Garden Eggplants Bitter?

The bitterness of eggplant is caused by the alkaloid solanine, which sometimes accumulates in the fruit, and most often in the skin. There are several reasons for its occurrence: late harvest, sudden temperature changes in the greenhouse, improper watering of plants, various features of the culture.

How Should Eggplants Be Stored?

Choosing the right eggplant and storing them is as important as preparing eggplant kebab. To store eggplants, first peel them and wait until they are completely cooled at room temperature. Divide the cooled eggplants into portions and place them in freezer bags. Seal the bags, put a date label on them and place them in the freezer.

How long will eggplant keep in refrigerator?

The eggplants that you buy extra for eggplant kebab, you can store at room temperature for about 3-4 days and in the refrigerator up to a week.

Can eggplant be frozen for later use?

Eggplants do not like cold, so you should not put them raw in the freezer, but fry the eggplants. It is also possible to prepare eggplant kebab with fried eggplant, only need to make the meatballs. Cool the fried and peeled eggplants at room temperature, and after making sure they are completely cool again, distribute them into cool bags or ziplock bags. Then seal the bags airtight, write the date of each day on each bag and place them in the freezer.

If you have any other questions about the eggplant kebab recipe, don’t hesitate to stop by, I’m always willing to help! In the meantime, stay safe, stay healthy and have a great day!

How do you keep eggplant fresh longer?

After peeling the eggplants, wait until they are completely cooled at room temperature. Divide the cooled eggplants into portions and place in freezer bags. Knot the bags, put a date label on them and place them in the freezer.

Is Aubergine OK if Brown inside?

The biggest problem in the preparation of eggplant dishes is the darkening of the eggplant. When you cut or peel an eggplant, the cells on the cut surface divide and open. When these cells come into contact with oxygen, oxidation begins and the eggplant changes color and turns brown. Therefore it is safe to eat

Experts advise against eating eggplant raw. It can lead to poisoning because it contains many substances. If the eggplant is roasted or fried, the poisoning is minimized, because harmful bacteria die.

Can you eat the peel on eggplant?

It prevents atherosclerosis and reduces the risk of coronary heart disease and stroke. You should eat the eggplant without frying it with its skin. Lowers cholesterol, protects against cancer

What is the healthiest way to cook eggplant?

The morning breakfast is taken in the same way for 2 weeks. The salad is prepared from tomatoes and boiled eggplant. To do this, boil 1 eggplant, cut into cubes, salt very little, chop tomatoes and add, add a tablespoon of olive oil and eat with relish.

Why is eggplant not good for you?